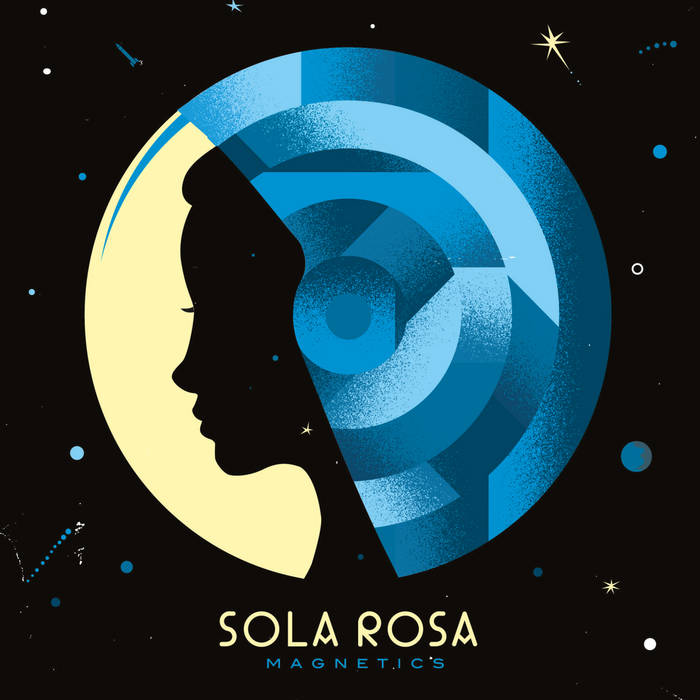 Sola Rosa’s Magnetics was chosen for “iTunes Best of 2014” R&B album and entered the album charts on #10 !

Sola Rosa’s sixth album Magnetics sees the band introduce a glorious assortment of fresh new vocalists from all over the globe. Noah Slee (NZ) released his ‘Mix Tape’ EP in 2013 to critical acclaim and has toured with many artists including renowned neo-soul artist Jill Scott; young up-and-coming singer/songwriter and Soundcloud phenomenon Jordan Rakei (AUS); BRIT School graduate Tawiah (UK) was first introduced to Spraggon via the attention of Gilles Peterson, who championed her song ‘Watch Out’ in 2007 and also named her the winner of his Worldwide Award for Best Newcomer the following year; Kevin Mark Trail (UK) features on three tracks after being recommended in the aftermath of an exceptional performance in the UK; Stones Throw Records’ singer and beatmaker Georgia Anne Muldrow (US) has been on Spraggon’s wish list ever since he heard collaborations with the likes of Eric Lau, Madlib and Sa-R, PPP and Erykah Badu; and long time best friend of both Trail and Mathieson Sharlene Hector (UK) has worked with too many artists to mention and currently sings with Basement Jaxx.

“Sola Rosa’s Magnetics is solid – a great album to have on repeat at the backyard this summer.” - Rachel Bache, NZ Herald

Sola Rosa continue to experiment and evolve, which is a true testament to their success over the years. Expect big things this Summer.


From his humble beginnings experimenting with a 4-track recorder at the ripe age of 19, Sola Rosa frontman Andrew Spraggon has cultivated over 15 years of rich and well-crafted melodic beats. Fusing a rotating mix of hip-hop, jazz, reggae, latin, neo-soul and funk topped with an assortment of diverse vocalists, Sola Rosa have released five critically acclaimed long players to date.
The latest construct of this collective sees this five-piece strip away their collaborations with an array of session musicians, choosing instead to record together as a complete band, which has allowed them to enjoy a more simple and methodical creative process.
The album was mixed in Queenstown by Josh Thorne aka DJ Alias. Analog mastering was once again undertaken by Ricardo Gutierrez in NYC . Some of his credits include Madonna, Just Blaze, Drake, The Rolling Stones and John Legend.
Currently Sola Rosa is made up of five key individuals. Matt Short joined Sola Rosa in 2004 as an incredibly accomplished session player, who has previously played with the Opensouls, Tyra & The Tornadoes and Vietnam War. Ben White an accomplished jazz guitarist followed suit in 2007. Vocalist, producer and MAINZ teacher Cherie Mathieson joined the band in late 2011 as their touring female vocalist. Mathieson has collaborated with celebrated producers and artists like Mark de Clive Lowe, Dego (4hero), Lanu (The Bamboos), Zed Bias and closer to home with The Relaxomatic Project, Solaa, Manuel Bundy, Jason Eli ( Joosika) and Lewis McCallum.
The latest addition is British artist and The Streets co-vocalist Kevin Mark Trail. Trail has collaborated with local jazz wizard Nathan Haines, international heavyweights Nitin Sawhney, Estelle and Black Twang and landed support slots for N.E.R.D, Massive Attack and Angie Stone.
Keyboard player, percussion, computer whiz, and all-round beat maestro Andrew Spraggon began performing and touring for the first time in his early 20s, as the lead vocalist and guitarist of indie rock band Cicada. Six years later, in 1998, Spraggon made the leap from 4-track to software and never looked back. He initially performed solo, but quickly recruited a revolving door of Sola Rosa collaborative incarnations and a band of talented session players that included players from Fat Freddy’s Drop, Opensouls and Ladi6. Spraggon was also a member of Dimmer from 2000 – 2004. Most recently he has produced local acts including Batucada Sound Machine and Tahuna Breaks.
Over the years Sola Rosa have enjoyed many achievements in New Zealand, including a #1 on iTunes and the Independent NZ Music Chart with their 2009 smash record ‘Get It Together’. It reached #15 in the album charts and went on to achieve Gold status. The awards in Sola Rosa’s cabinet include Best Independent Release in the 2000 bNet Music Awards for the ‘Entrance To Skyway’ (EP) and Best Electronica Album in 2001 for ‘Solarized’. They also received nominations at the Vodafone NZ Music Awards for Best Dance/Electronica Album in 2006 for ‘Moves On’, Best Producer and Best Dance/Electronic Album in 2009 for ‘Get It Together’ and Best Electronic Album in 2012 for ‘Low and Behold, High and Beyond’.

Bandcamp Daily  your guide to the world of Bandcamp